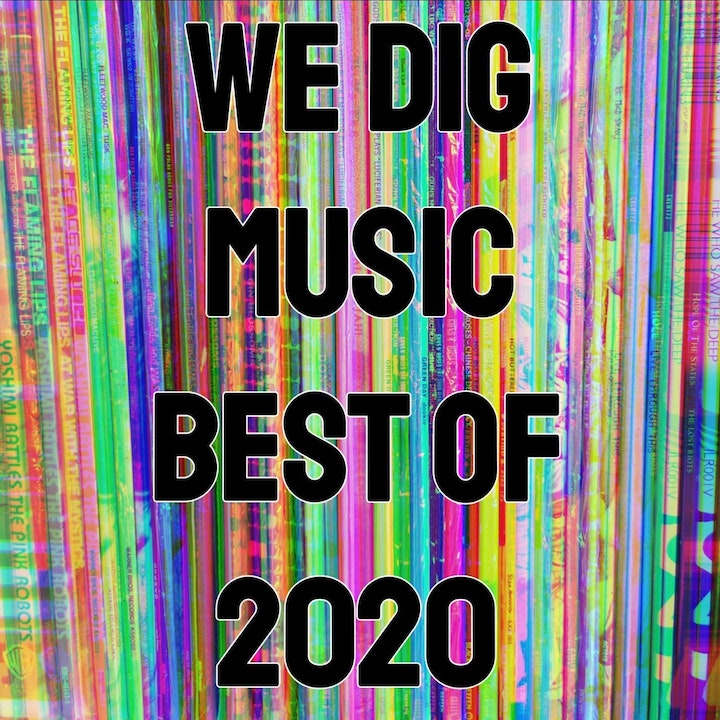 2020! It's been a strange one. We may not have had many gigs to go to but there's been some absolutely brilliant music helping us all through, so, as with every year, here's our annual best of the year episode!

Over the next 2 hours (Longest episode...

2020! It's been a strange one. We may not have had many gigs to go to but there's been some absolutely brilliant music helping us all through, so, as with every year, here's our annual best of the year episode! Over the next 2 hours (Longest episode yet!) we'll count down our favourite 30 songs of the year, plus we'll also discuss songs we've discovered this year that weren't released in 2020, and a few songs that narrowly missed out on being included. We've changed the voting system a little this year with the help of our friend Peter Latimer who is a maths genius. (you'll often find him stood near the mixing desk at Slowdive gigs inputting the setlist into an excel spreadsheet to predict which song will be the set closer)... We've each chosen our 10 favourite songs of the year and sent them over to Ian's wife Lydia, who put the playlists together and distributed them, so we were each given a playlist of the 20 songs from the other two hosts, along with our own 10. We then ranked the playlists in order of preference and sent them to Colin's wife Helen, who totalled up the points and worked out the order. Helen also joined us on the episode to read out the countdown, which we found out as we recorded so all reactions are genuine. Now, admittedly, in parts we're a little bit brutal to some of the songs in the list as we're three separate people with differing music tastes, but please remember that to be in this episode at all the songs have to have been in one of our top 10's of the year. The playlist of 20 songs from the other two hosts was scored as usual, our favourite song got 20 points, counting down incrementally to our least favourite which got 1 point. The scoring of our own list of 10 is now slightly more complicated in order to give a truer level of points to our own favourites. So rather than them only being able to score as many points as our 10th favourite in the other list, the points in our own list were distributed as follows - 1st place - 20 points 2nd place - 18 points 3rd place – 16 points 4th place – 14 points 5th place – 12 points 6th place – 9 points 7th place – 7 points 8th place – 5 points 9th place – 3 points 10th place -1 point Peter had also suggested a method to avoid so many songs with identical scores, but it was particularly complicated so we decided that we weren't that bothered about songs in joint positions! Bands featured in this episode include (In alphabetical order, no spoilers here!) - Fiona Apple, Arab Strap, Astrel K, The Avalanches, Bell Witch Phoebe Bridgers, Bully, Caspian, Code Orange, Dark Globes, Dystopian Future Movies, Epic45, The Flaming Lips, Ghostpoet, Honey Harper, The Hell, Jonathan Hulten, Huntsmen, Ihsahn, I LIKE TRAINS, Jesu, Johannes & Farkosten, Lanterns On The Lake, Major Parkinson, Nada Surf, Orville Peck, Peel Dream Magazine, Молчат Дома, Porridge Radio, Royksopp & Robyn, Sleep Token, The Slow Summits, Squarepusher, Such Small Hands, Taylor Swift, Thank You Scientist, Ulver, Vernon Jane, Bob Vylan, Watkins Family Hour, Waveform*, A.A. Williams, Hayley Williams, Steven Wilson, Zeal & Ardor & more. Find all songs in alphabetical order here - https://open.spotify.com/playlist/7IQxI9A4C4fmQ17iUxrDlq?si=paCpP09MSSqcWOdcs5Gi8g Hosts - Ian Clarke, Colin Jackson-Brown & Tracey B Guest starring Helen Jackson-Brown. Playlist compiling/distributing – Lydia Clarke Recorded/Edited/Mixed/Original Music by Colin Jackson-Brown for We Dig Podcasts Thanks to Peter Latimer for help with the scoring system. Say hello at www.facebook.com/wedigmusicpcast or tweet us at http://twitter.com/wedigmusicpcast we're also now on Instagram at http://instagram.com/wedigmusicpcast We're part of the We Made This podcast network. Find all our episodes plus other brilliant shows such as We Buy Records, Pick A Disc, Giddy Carousel Of Pop plus Colin and Ian's other podcast Free With This Months Issue and loads more at http://wemadethispod.com/ You can also find all the We Dig Music & Free With This Months Issue episodes at www.wedigpodcasts.com