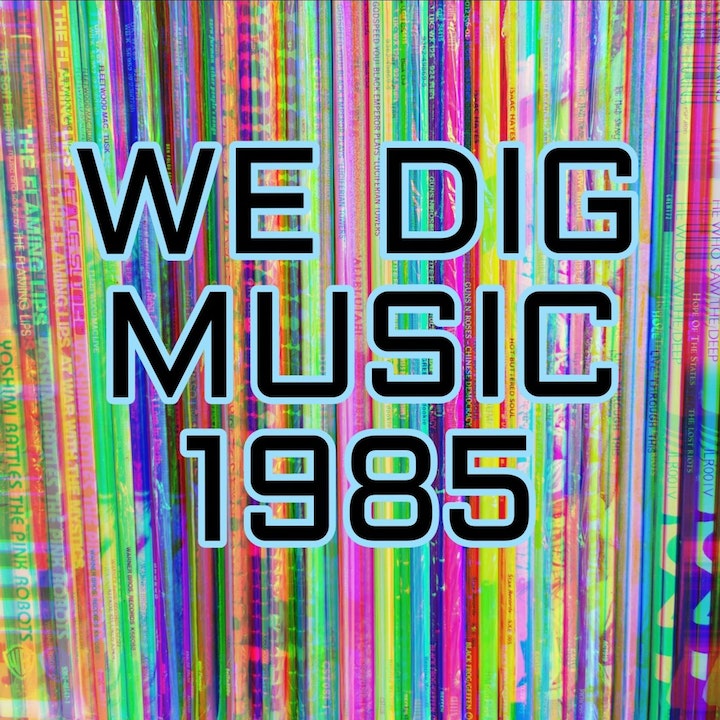 It's 2021! But not for your intrepid We Dig Music crew. We've stolen Doc Emmet Brown's DMC DeLorean and gone back to 1985 where we've been riding around in Sinclair C5's, wearing ridiculous baggy suits, and watching Live Aid on telly. We've also been...

It's 2021! But not for your intrepid We Dig Music crew. We've stolen Doc Emmet Brown's DMC DeLorean and gone back to 1985 where we've been riding around in Sinclair C5's, wearing ridiculous baggy suits, and watching Live Aid on telly. We've also been talking about songs that sound like Adam Ant at the wrong speed, Guitars that sound like pointy spiders, & Electro classics performed in sadly missed Birmingham toy shops. We've each chosen our 10 favourite songs of the year and sent them over to Ian's wife Lydia, who put the playlists together and distributed them so we were each given a playlist of the 20 songs from the other two hosts, along with our own 10. We then ranked the playlists in order of preference and sent them to Colin's wife Helen, who totalled up the points and worked out the order. Helen also joined us on the episode to read out the countdown, which we found out as we recorded so all reactions are genuine. Now, admittedly, in parts we're a little bit brutal to some of the songs in the list as we're three separate people with differing music tastes, but please remember that to be in this episode at all the songs have to have been in one of our top 10's of that year. Bands featured in this episode include (In alphabetical order, no spoilers here!) - A-Ha!, Anthrax, Beat Happening, Kate Bush, Celtic Frost, Lloyd Cole & The Commotions, The Cult, The Cure, The Dream Academy, Everything But The Girl, Foreigner, Gene Loves Jezebel, Paul Hardcastle, Hüsker Dü, The Jesus and Mary Chain, Howard Jones, Killing Joke, Kino, Cyndi Lauper, Mental As Anything, Prefab Sprout, Prince, R.E.M., Saint Vitus, Skinny Puppy, The Smiths, S.O.D., Sonic Youth, Suzanne Vega & Tom Waits Find all songs in alphabetical order here - https://open.spotify.com/playlist/7Mr106Uvvpqzt0p3nbBcvU?si=ztbbIDHNT4-yfL1l5Luskw The playlist of 20 songs from the other two hosts was scored as usual, our favourite song got 20 points, counting down incrementally to our least favourite which got 1 point. The scoring of our own list of 10 is now slightly more complicated in order to give a truer level of points to our own favourites. So rather than them only being able to score as many points as our 10th favourite in the other list, the points in our own list were distributed as follows - 1st place - 20 points 2nd place - 18 points 3rd place – 16 points 4th place – 14 points 5th place – 12 points 6th place – 9 points 7th place – 7 points 8th place – 5 points 9th place – 3 points 10th place -1 point Hosts - Ian Clarke, Colin Jackson-Brown & Tracey B Guest starring Helen Jackson-Brown. Playlist compiling/distributing – Lydia Clarke Recorded/Edited/Mixed/Original Music by Colin Jackson-Brown for We Dig Podcasts Thanks to Peter Latimer for help with the scoring system. Say hello at www.facebook.com/wedigmusicpcast or tweet us at http://twitter.com/wedigmusicpcast or look at shiny pictures on Instagram at http://instagram.com/wedigmusicpcast We're part of the We Made This podcast network. Find all our episodes plus other brilliant shows such as We Buy Records, Pick A Disc, Giddy Carousel Of Pop plus Colin and Ian's other podcast Free With This Months Issue and loads more at http://wemadethispod.com/ You can also find all the We Dig Music & Free With This Months Issue episodes at www.wedigpodcasts.com Support the We Made This podcast network on Patreon: www.patreon.com/wemadethis